Using a Gotek Floppy Emulator with the Akai S1000 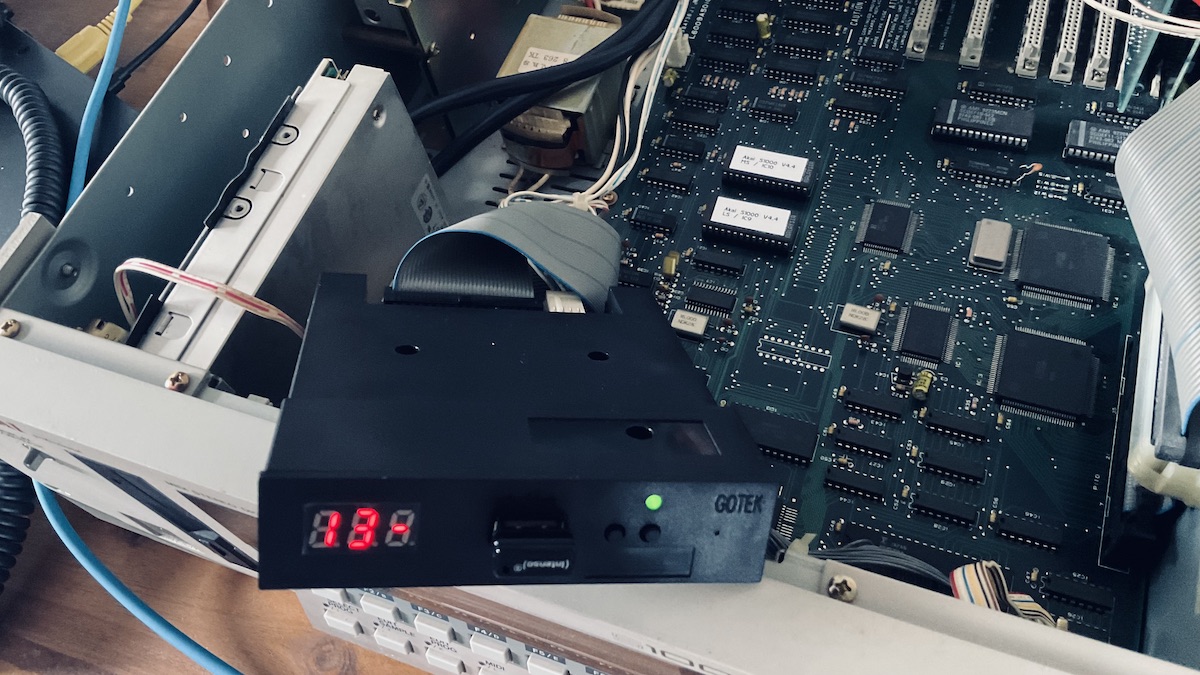 The Akai S1000 comes with a floppy drive and as much as I like retro stuff and old hardware I really don’t want to use real floppy disks for saving my samples and programs. Luckily there is great solution for this: The Gotek floppy emulator. They are widely used in retro-computing circles and will let you use a USB stick containing disk images instead of actual floppy disks.

Since the factory firmware of the Gotek is a bit crappy, I opted for the open source FlashFloppy firmware. It supports a huge variety of retro computers, synths and basically anything that has a floppy drive. I will not go into detail in how to install the firmware on the Gotek, since there is an excellent installation guide on the FlashFloppy GitHub wiki. Check the Gotek Models page before buying to make sure you get a FlashFloppy compatible Gotek model.

Once FlashFloppy is installed on the Gotek it’s time to configure it for the Akai S1000. The USB stick should be FAT32 formatted. Make sure to use a good, reliable USB stick! I first tried it with a cheapo stick that caused me nothing but head-aches and a lot of time spent with trouble-shooting.

There isn’t a dedicated entry for the S1000 on the FlashFloppy Host Platforms page but the S950 and the S1100 are there. So I first tried the proposed configuration for the S1100.

After a bit of digging, reading, and trial-and-error, I found this FF.CFG to be working for me:

It’s a combination of the proposed S1100 config on the Wiki and the results found by Inkoo Vintage Computing that they documented on their blog.

Good to know: The configuration is saved on the Gotek (or with the disk image? not sure), so deleting a line from the config will not revert the setting to the default value but it will retain the value last set via the config. I learned this when I tried nav-mode = indexed and wanted to switch back to the default (native) by deleting the nav-mode line in FF.CFG. That’s why I added the nav-mode = native line.

Using a cheap, unreliable USB stick was only the first mistake I made, the second was assuming that the Akai used 1.44 MB disks which, of course, it doesn’t. I spent a good amount of time formatting 1.44 MB disk images on the S1000 only for it to tell me that the disk cannot be read after formatting. After a bit of digging around the internets I found a disk image containing samples for the S950 and it had a size of 800 KB (819200 bytes) which isn’t the 720 KB I would have expected for a DD disk. I know the S950 only reads DD disks, and the S1000 reads HD and DD disks. So after some more googling it turns out that disk images for the S1000 need to be 1.6 MB (1638400 bytes). So I created a file with the correct size of 1638400 bytes, gave it a .img file extension and formatted the image in the S1000. And sure enough, it worked!

To spare you the trouble of hunting down an S1000 disk image or creating your own I have uploaded my S1000 formatted empty image here. 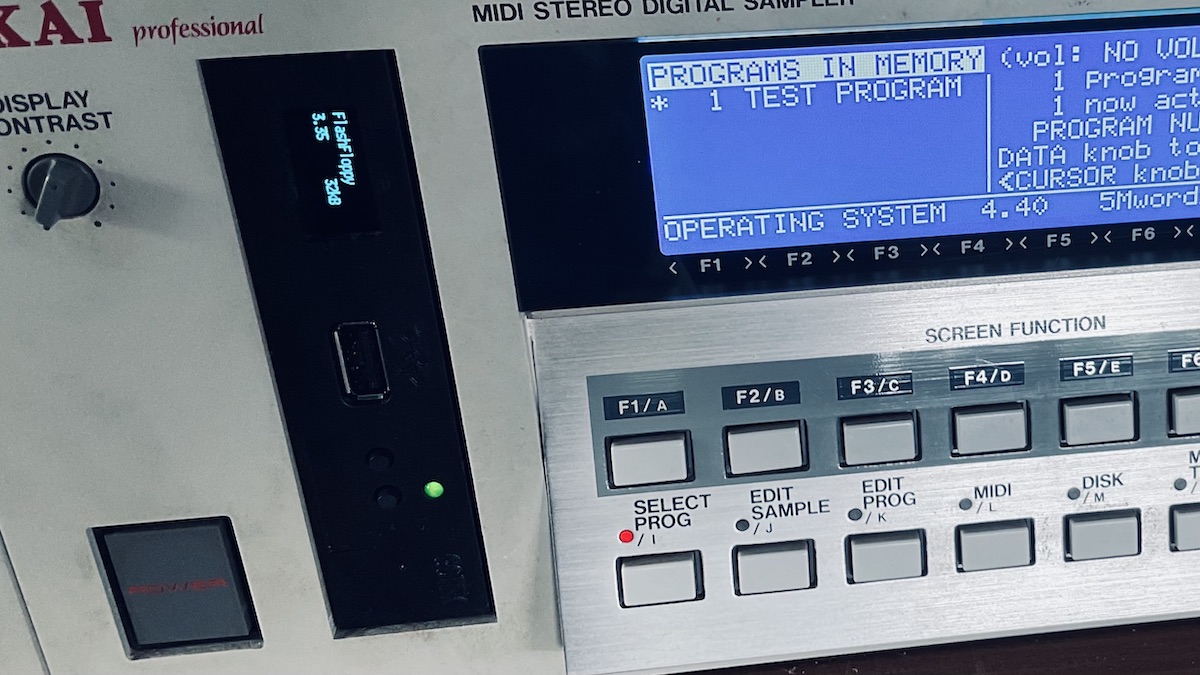 Mounting the Gotek inside the S1000 is a bit fiddly and requires you to remove the front panel. First take out the two screws at the bottom of the case that hold the floppy drive mounting bracket, then remove the front panel. This is done by loosening the five screws at the top of the front panel and the 6 screws on the bottom. Also the Rec Level and Main Volume knobs must be removed. The keypad on the front panel is connected with a ribbon cable on the motherboard. You can just take off the connector on the motherboard. Also the two XLR inputs are connected to the audio board. Either take the connectors off the audio board (very fiddly) or leave them in place and be very careful when working on the disk drive. I opted for leaving them in place.

It’s worth mentioning that the Gotek does not speed up disk access in comparison to real floppy disks. Disk access will be the exact same speed as with real floppies but with the added convenience of using disk images on a USB drive instead of floppy disks.